Unique drink combinations are trendy these days, but there’s one in particular that is causing a major debate online. Back in the 70s, anyone who watched 'Laverne and Shirley' most likely tried milk and Pepsi, at least once. While that was definitely not palate pleasing, the internet is split on Milk Coke. Milk Coke is actually a thing. It’s two-thirds coke and a third whole milk. No kidding.

Comedy writer Jim Felton started the commotion when he tweeted a pic of him drinking the concoction. He stated, “Milk coke is a real thing. Brummies love it. We can all move on from this discussion now. I will be taking no further questions.”

The reaction ranged from comparing it to a Coke float, lots of curiosity, and some major disgust.

When tweeters gave it a try, many liked it, according to their responses. You have the recipe...give it a shot! 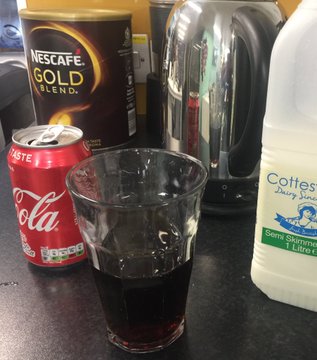 Want to know more about The Big 95 Morning Show with DeWayne Wells? Get the official bio, social pages and articles here on Big 95! Read more